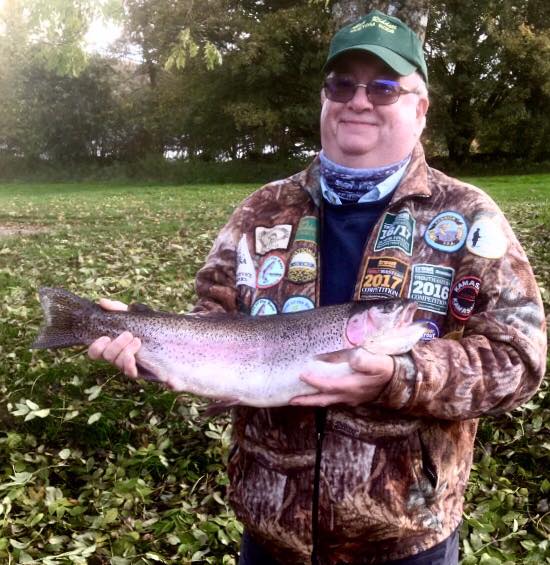 On Sunday Wimbleball Fly Fishery hosted the Kennick Flyfishers club for the final round of their Snowbee sponsored Top Rod Competition 2019. The weather was kind to them, considering recent conditions providing the 14 anglers taking part with a dry, sunny day with a northerly breeze. After a good day on the water they managed 52 fish between them, with 8 anglers getting their bag limit, the action was mostly in the Bessoms & Ruggs areas. Best fish of the day went to Alan Riddell of Newton Abbot with a fine Rainbow of 8LBS 6OZ, (pictured). Top 3 anglers were:
1ST ALAN RIDDELL OF NEWTON ABBOT – 5 FISH 19LBS
2ND TOM HENDY OF CHUDLEIGH – 5 FISH 15LBS 11OZ
3RD ANDY WATSON OF BOVEY TRACEY – 5 FISH 15LBS 3OZ

Kennick Fly Fishers Association (KFFA) was founded in 1974 by a group of local anglers with a common interest in and a love of fly fishing. It is a fully constituted amateur organisation run for the benefit of its members who share a passion for fly fishing and enjoyment of the countryside.

They have a membership of 120, which makes Kennick one of the largest fishing clubs in the South West. Details of their club can be found on their website at: http://www.kennickflyfishers.co.uk/index.html