The sell-out field of 46 anglers set off from the boat dock at 10am in near perfect conditions with high expectations. Broken cloud cover and a gentle breeze ensured Blagdon’s hard fighting Brown and Rainbow trout were actively feeding at intervals throughout the day and rarely ventured from the very top of the water.

Blagdon was on notable formwith anglers finding good numbers of fish holding in the front of the infamous Blagdon lodge, Butcombe Bay and the Dam Basin. Competitors managed to catch steadily during the match with successful tactics ranging from teams of imitative Nymphs fished on long leaders, or a combination of blobs, boobies and cormorants pulled through the surface layers on intermediate lines.

The unique format of the BRFFA Hidden Pairs means the field of competitors only find out who their fishing partner for the day has been as the final results are revealed.  As the competitor placing’s were announced and pairings were disclosed, the air of anticipation built at Blagdon’s lodge as it quickly became clear that Dave Reynolds and Pete Bessell with their combined weight and tally of released fish had vanquished the  field, soundly beating Mark Miles and Sean Glover into 2nd place. 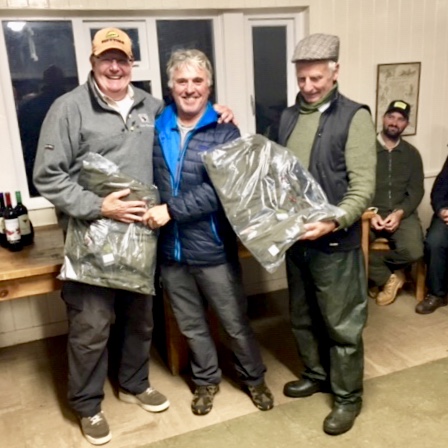 The BRFFA is a long established and friendly Fly Fishing club with an ethos centred on developing angling skills.  We have many members that have represented England at National and International level who are keen to share their knowledge, skills and experience to improve others angling success.  For more information about joining the BRFFA and forthcoming events, please visit our website www.brffa.com